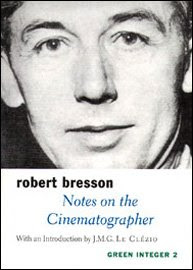 From Notes on the Cinematographer:

Accustom the public to divining the whole of which they are given only a part. Make people diviners. Make them desire it.

Be as ignorant of what you are going to catch as is a fisherman of what is at the end of his fishing rod. (The fish that arises from nowhere.)

A highly compressed film will not yield its best at the first go. People see in it at first what seems like something they have seen before.

Jeffrey Overstreet
Jeffrey Overstreet watches far too many movies, writes film reviews and two weekly columns for ChristianityTodayMovies.com, maintains the Web site LookingCloser.org, contributes to Paste Magazine, and is at work on a series of novels. He works at Seattle Pacific University.