For the Beauty of Our Own Backyards

Late last fall, I went for a bike ride just before sundown. At the entrance to the park was a long, fairly steep hill. A family was out for a walk. The parents were pushing a stroller, and a set of twins, a boy and a girl about seven years old, rode ahead on their bikes, stopping and waiting now and then for Mom and Dad to catch up.

The little girl on the miniature two-wheeler reminded me a lot of my daughter, Emma, at that age. She clearly delighted in all her senses. So when I heard a piercing and prolonged squeal, I knew nothing was wrong. Quite the contrary, everything was exquisitely right. This little girl was yelling because the sun was streaming red ribbons across the sky, because the fields surrounding us, with the first fallen leaves, smelled like autumn, because she was coasting down a huge hill with her brother at her side. God was smiling on her, and all was right in the world.

Her cry reminded me of Psalm 19:1, so full of the earth’s praise and delight: The heavens declare the glory of God; the skies proclaim the work of his hands. I could almost hear the trees and birds shout alongside this little girl: Wind in my leaves! Wind in my branches! Wind under my wings! Praise God!

I passed the girl and her brother several times on my loops around the park. Neither her enthusiasm nor her voice ever flagged. When I pedaled back home, I thanked God for screaming little girls and the renewing beauty of his creation.

We Can’t Love What We Don’t Know

And it’s not just kids. A recent study by the University of Illinois found that Americans spend 25 percent less time in nature than we did just two decades ago.

Many children and adults today are overstimulated—obsessed with computer games, Facebook, and technology. These activities are not bad in themselves, but they can be harmful to our relationship with God if they are a primary focus of our time and attention. In Last Child in the Woods, author Richard Louv describes how “green time,” unstructured time outside in nature, has been taken over by “screen time,” time spent in front of an electronic screen.1Research has shown that excessive television watching contributes to obesity, violence, and lower intelligence in children. In contrast, children who spend time outside have lower stress levels, greater respect for themselves and others, and play more creatively.

When our kids were preschoolers, we took them to the town band concert every Wednesday evening. We brought a blanket, a simple picnic, and a couple of lawn chairs. The children ran around and danced, while the adults enjoyed the music under the towering maples and starlit sky.

When our kids got a little older, they were able to walk by themselves to the school playground behind our house and the church playground across the street. We chose not to purchase a swing set for our backyard; instead, Clark and Emma enjoyed hundreds of hours playing on our next-door neighbor’s rope swing, which hung from a tall tree branch along the pathway adjoining our yards.

Though our lot was small, a stream flowed along the back border. Beyond the stream were two acres of town-owned forest. This woodland was not exactly a vast wilderness, but it was big enough to provide unlimited exploration and fun. Clark and Emma played nearly every day in the woods and stream, digging for treasure, building forts, staging sword fights, and leaving morsels of food in fairy houses.

During the summer, they climbed trees. In the fall, they jumped in soft piles of leaves. In the winter, they built snow mazes. And in the spring, they sailed twig-and-leaf boats down the gushing stream.

Whenever I couldn’t find Clark, I knew to look up. More than half the time, he and his best buddy were sitting in the branches of a nearby tree. Yes, they often climbed too high for Mommy’s comfort, but that’s part of the growing up—and letting go—process. Outdoor play helped my apron strings loosen gradually, allowing our kids to grow into independent adults who do not need to be entertained 24/7 or have every moment of their lives scheduled.

Last summer, Clark went back to visit our old neighborhood. The rope swing is still there for the next generation of children to enjoy. Clark, now well over 6 feet tall and 185 pounds, could not resist taking a running leap and sailing far out over the neighbor’s lawn. His crash landing into the tree trunk brought back happy memories—along with a few familiar bruises—and the sometimes painful pleasures of a childhood well spent.

The real test, of course, is what habits your children take with them when they become teens and young adults.

Clark is now twenty years old, a first-year medical student studying to become a missionary doctor. Despite the demands of medical school, he spends at least two hours outdoors each day—about twenty-eight times the national average. Clark lives downtown in a large city, but he quickly discovered all the green spaces. Armed with a pocketful of note cards, he memorizes anatomy and biochemistry facts while going on long walks. Though he does own a car, a miserly Geo Metro, he only used half a tank of gas between August and December. Instead, Clark prefers to ride his bike—often as fast as driving in the city and always a better vehicle for appreciating the beauty of God’s nature.

Our daughter Emma, now eighteen, became so convicted by God’s first commandment to humanity in Genesis 2:15—to tend and protect the Garden—that she wrote a book for teens about becoming better stewards of creation. In spring 2008, Zondervan/Youth Specialties published the book, It’s Easy Being Green: One Student’s Guide to Serving God and Saving the Planet (www.itsezbeinggreen.org). Here’s what Emma says about her generation’s role in preserving the beauty of God’s creation:

Like that little train [in The Little Engine That Could], we may feel like there’s a huge mountain standing between us and the greener world we long for. But Jesus had a few words for us about mountains. In Matthew 17:20, he says, “If you have faith as small as a mustard seed, you can say to this mountain, ‘Move from here to there,’ and it will move. Nothing will be impossible for you.”

With faith in God, nothing is impossible. Living a green life is within the reach of every one of us. I think you can. God thinks you can.

[. . .] My hope is that [when the next generation sees us, they’ll] see a generation that took its choices seriously, that placed its faith in God, and found the strength to climb the highest mountain.

My hope is that they’ll see a little generation that did.2

Emma’s words offer me great optimism, but what gives me even more hope are her actions. Last semester, Emma and her college roommate both brought drying racks to school. In their tiny dorm room, they managed to air dry all of their clothes—saving five pounds of coal and greenhouse gases per load. Because it takes both of their racks to dry one load, they needed to plan ahead and coordinate their clothes washing schedules. In exchange for this small inconvenience, they were able to avoid furthering the rapacious coal mining practices (coal produces 90 percent of the electricity in our region) that destroy God’s mountains.

Like Jesus, we all need frequent visits to green pasture and still waters to renew our souls. Jesus retreated to the wilderness, gave sermons on a mountain, and camped out on the edge of the Jordan River.

My favorite hike is along another river, about two miles from my home. I like it because I can get there on foot, and once I hike beyond the main road, I rarely see another human. Most of all, it’s time spent in the harmonious God-created world, not the jarring man-created world.

On this hike, the easy part comes first; I hike down for the view. The view is not some grand vista—just a gently moving river. Always I find the river to be quietly comforting. Deep in prayer on one such hike, as I trudged back up the hill, I found myself startled by a bumblebee buzzing around my head. In between my footsteps, muffled by leafy carpets, I heard the starlings singing. They seemed to be saying, “This is God’s woods; not yours, not mine.”

I recently read a passage by the visionary twentieth-century Jesuit priest Pierre Teilhard de Chardin. Trained as a geologist and paleontologist, Teilhard argued that animals know but that man knows that he knows. In other words, it’s our ability to reflect that makes us more than a successful extension of the squirrels I heard chattering above me in the woods.

And yet, though we are “smarter,” animals have much to teach us. Watching those squirrels jump from branch to branch reminds me that every step I take is no less a leap of faith. The squirrels’ seemingly impossible acrobatics are only made possible by the very same hand that holds me up every moment of every day. We, like these forest creatures, must place our ultimate trust in God, in much the same way our sons and daughters rely upon us.

The walk in the woods teaches me what animals—and children—instinctively know: that God’s sustaining beauty is fully present all around us, if only we pause long enough to see.

Like the young girl I watched riding her bike, we all need to spend more time with God’s wind in our hair. We can’t love what we don’t know. Neither can future generations, especially if we leave them a legacy of mercury-filled waters and polluted pastures.

The more time I spend in God’s garden, the more called I feel to tend and protect the beautiful world that he created for our use—not abuse—and for our enjoyment.

This essay has been adapted with permission from Go Green, Save Green (Carol Stream, IL: Tyndale Publishing, spring 2009). You can click on the link below to support Nancy Sleeth and The Other Journal by purchasing her book from Amazon.com. 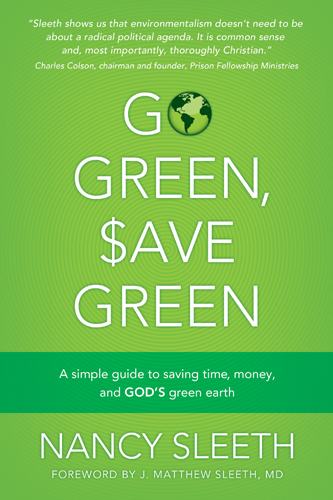 Nancy Sleeth
Nancy Sleeth is the author of Go Green, Save Green: A Simple Guide to Saving Time, Money, and God’s Green Earth (Tyndale, March 2009). She is also Program Manager for Blessed Earth (www.blessed-earth.org). Creation care is a family ministry: her husband, J. Matthew Sleeth, MD, is author of Serve God, Save the Planet: A Christian Call to Action and her daughter, Emma Sleeth (now eighteen), is author of It’s Easy Being Green.

The Leaving Is (Probably Not) the Hardest Part: An Interview with Drew Dyck

An interview between TOJ Editor-in-Chief Chris Keller and the author of GENERATION EX-CHRISTIAN, Drew Dyck.

Joining the Communion of Saints and Writing the Unwritable Word

When strangers at a party or on an airplane find out you’re in divinity school, …