Philanthropy Philms: After The Wedding, Please Give

A few years back, much fuss – mostly deserved – was made over The Lives Of Others (“Das Leben der Anderen” 2006), and everybody saw it. (Perhaps because of the irresistable Austrian-ness of the tyro director’s handle — Florian Henckel von Donnersmarck. Yes, I think that’s why.) The only pity was that the mob response to that pretty darn fine foreign film completely overshadowed an even finer foreign film playing at precisely the same time, After The Wedding (“Efter brylluppet” 2006). I never understood how one made it into everybody’s datebook, while the other slipped past uncelebrated.

If you haven’t seen Wedding, you ought to. Screenwriter Anders Thomas Jensen seems to be Denmark’s most prolific: he’s got Dogme credits, and his outrageous Adam’s Apples (“Adams æbler” 2005) is an all-time favourite. A frequent collaborator with director Susanne Bier and actor Mads Mikkelsen, both of whose work on the picture in question is marvellous.

All of which is a long way of getting to the point of this post. The essential concern of After The Wedding – or at least its point of departure – was philanthropy. (How many charity flicks can you name? It’s something I think about a great deal, but it doesn’t show up in a lot of fiction. Odd. I guess people find car chases more relevant to their personal lives.) Please Give takes up similar themes, if on a smaller scale. And sounds like a film not to miss. Here are excerpts from David Denby’s May 3 New Yorker write-up. 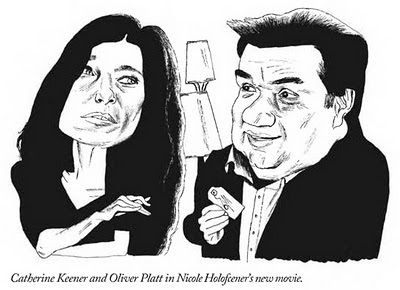 . . . From scene to scene, Please Give, a radiant comedy of middle-class mores, depends on observations so acute that the movie, even as it borders on satire, is intensely sympathetic. Writer-director Nicole Holofcener (Lovely & Amazing, Friends With Money) is a virtuoso of awkward domestic scenes in which conversation goes absurdly awry. Bu she’s ambitious too, and among the deftly launched jokes, Please Give explores such large and grave matters as the nature of benevolence and the exhausting but inescapable necessity of family loyalty. . . . A finely wrought short story, all but perfect. . . .

A New Yorker by birth, she spent time as a teenager on Woody Allen’s sets. (Her stepfather, the late Charles Joffe, was Allen’s longtime producer.) In PPlease Give, she inhabits a slightly downscale version of Allen’s worried and self-conscious Manhattan. . . .

Kate and Rebecca, a set of paired characters, act as if they were always living under scrutiny. Holofcener’s touch with these two glum urban saints is gently comic: Rebecca Hall just slightly parodies the wallflower Rebecca’s need to always be good. Her Rebecca is not quite as forlornly conscience-stricken, however, as Kate, who can’t walk down the street without slipping five bucks to a homeless person. Kate’s philanthropy is underoing a frenzied crisis. Oblivious to everything but her own guilt, she begins helping people who don’t need help. . . .

Not much happens: a couple of love affairs, one trivial, one perhaps serious; some moments of pleasure. . . The trouble with life-goes-on movies is that they don’t electrify the senses. This one doesn’t, either, but it does stimulate moral imagination. . . .