Gods, Sin, and Fear Itself 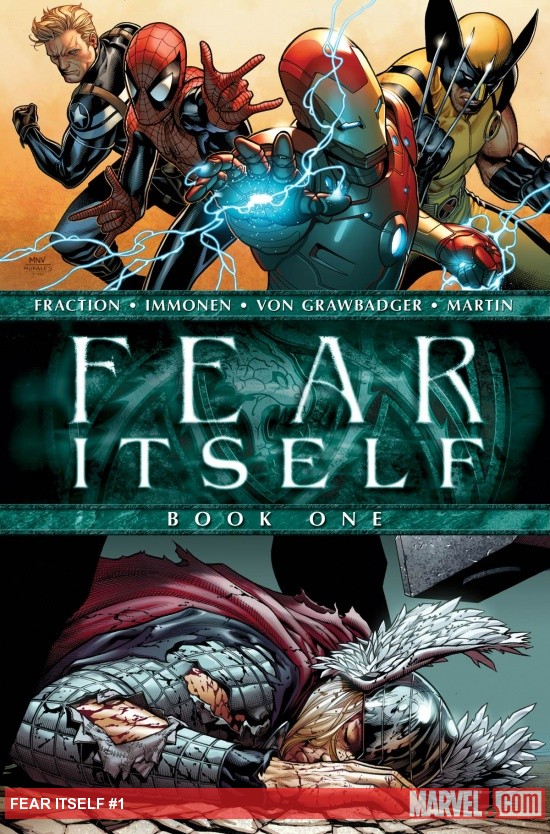 Throw together a disaster brought about by superhero Speedball, the Norse gods, and the Sinthia Schmidt, aka Sin daughter of Captain America’s nemesis the Red Skull, and the setting makes itself for Marvel Comics’ event “Fear Itself.”  This event, while having several stand alone limited series, will run throughout a large number of Marvel titles.

In Fear Itself: Book One, we see a crowd ramped up with religious fervor, riot at the scene of the disaster.  Clearly the current atmosphere regarding the Islamic center built near the site of the 9-11 attacks is the inspiration of this scene.

The action continues with Sin raiding her deceased father’s secret bunker and claim her rightful place as not only the true heir of the Red Skull but the true Red Skull herself.  In the one-shot “Fear Itself: Sin’s Past” Sin’s history is recounted through old issues of Captain America.  At the end of that issue, the authors connect her life directly to the seven deadly sins.

The Norse gods are currently living on Earth and Tony Stark is attempting to build a new home for them here.  Odin is unhappy to live among such creatures.  Thor lobbies for them to stay but that only instigates a fight between the two.  While all the other gods obey Odin’s summons to return across the rainbow bridge, Thor refuses.  It is interesting to compare the political wranglings in the pantheon of gods and the political life within the Trinity.

After the gods depart, Spider-man asks Steve Rogers (formerly known as Captain America, but he no longer uses that name) what has happened.  Steve replies “The gods left us Spider-man.  We’re on our own.”  One must wonder if superheroes are attractive to humans as mythical stories so that they might see their own destiny in their own power.  Or is there something more there, something to truly fear?

It remains to be seen where this whole series will go but the stage is set for reflection upon gods, sin and fear itself.