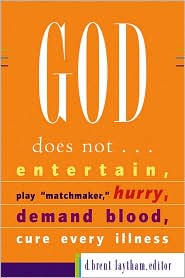 D. Brent Laytham, ed., God Does Not…: Entertain, Play Matchmaker, Hurry, Demand Blood, Cure Every Illness (Grand Rapids, MI: Brazos Press, 2009), 160 pages, $17,99 paper. Click here or on the image to buy God Does Not from Amazon.com and help support The Other Journal.

“God helped me shoot gunman, ” reads the newspaper headline of how a security guard, allegedly under divine influence, shot a gunman on rampage in a Colorado Springs megachurch. God Does Not, however, poses the question, “Does God shoot people, or not?”

How does God act? And how can we know? “[I]maginative discernment of what God is [and is not] doing in the world is the point of God Does Not.” The authors of this essay collection all argue, in one fashion or another, that the church knows that “God acts like Jesus of Nazareth [. . . .] Jesus is, quite simply, God in action.” And for the church to do as God does, “an act of faithful imagination is required—one that grasps the pattern of God’s action in Jesus Christ and then discerns semblances of it in the rough-and-tumble of daily life.”1 Brent Laytham argues in the introduction that when the church mistakenly assumes the center of God’s activity to be other than Christ and his body, the church, God quickly becomes the divine guarantor of someone else’s “happy ending,” be it of an individual, couple, or nation. Thus, each essay seeks to aid Christians engaged in “imaginative discernment” about what God is and is not doing in everyday life. Such discernment is meant to help churches that seek to live and act faithfully by teaching them how to conceive of God’s action in the life of Jesus as practical wisdom for Christian action in the world.

Joel Shuman, in writing “God Does Not Wear a White Coat—But He Does Heal,” deliberately follows this format, rebutting contemporary distortions of God’s action in the world by reconstructing a picture of faithful action through reflection on the action of God in Christ. Shuman argues that Christians often reduce God’s healing activities down to meeting their personal desires for health and the removal of suffering. God does in fact heal, but the Christological center of divine healing is all but lost. The evangelical and ecclesial implications of God’s healing as sign and witness to God’s reign in and through one’s participation in the body of Christ is replaced by God as eliminator of suffering par excellence.

Yet if Christ embodies God’s healing action in the world, then health is to be defined as active participation in Christ’s body. Healing occurs through God’s hospitality toward those cut off from the body of praise. Illness, then, should not first be construed as physical suffering to be eliminated at all costs but rather as alienation from God, overcome by the hospitality of God in Christ and his church. Thus, treatment of illness shifts from the predictable and technological production of “health” as commodity to trusting what Shuman calls God’s “wild faithfulness,” faithfulness so wild that he discovers it in the most unlikely of people—his own church. During a period of suffering, Shuman and his family experienced the faithful presence and hospitality of God through the church, which led to the most unexpected of responses—praise!

In “God Does Not Want to Write Your Love Story,” Margaret and Dwight Peterson lament that Christian notions of love have been reduced to “marriage” as a church-sanctioned, Hollywood romance. Contra Paul, the Judeo-Christian-Hollywood tradition of romance construes the fundamental human problem not as sin, but personal loneliness—celibate singleness, remedied by divinely guaranteed matrimony—sex. Of course, as divorce statistics among Christians reveal, marriages burdened with beatitude often become infernal. Even the sexiest of spouses fall short of the beatific vision.

The Petersons urge the church to leave behind “Christian” romantic-advice books, with their promises of romantic success “just as we [with our Hollywood formed desires] imagined it,” calling the church back to cruciform love with the kind of paradoxical success only God can imagine. Marriage, they argue, is a good gift of God but not an end in itself; it ought to be ordered to the deeper love story of God and his church.

While the article offers an insightful critique, the constructive work falls short. Rather than teaching the art of “imaginative discernment” for actions rooted in a reflection on the action of God in Christ, it offers helpful “principles” for finding a partner with a cruciform notion of matrimony.

In like manner, “God Does Not Entertain,” by Jason Byassee, does not substantiate, by way of practical wisdom, how the church ought to seek delight in worship rather than entertainment. Despite the fact that the essay is delightfully written and full of wisdom, Byassee’s fear of being prudish causes him to speak out of both sides of his mouth. The argument for why we ought to love movies makes such a strong case for entertainment that his critique of entertainment, and its diabolical power to deform human desire, seems disingenuous if not downright dualist. The essay leaves one asking, “Is entertainment just entertainment or not?”

Daniel Bell, who writes “God Does Not Demand Blood,” puts forth the most difficult and ambitious essay of the book. Bell explicitly rejects any claim that God either inflicts violence or requires suffering in order to redeem creation. “On the surface,” Bell admits, “the claim that God does not require blood and suffering appears patently absurd. After all, is not the cross of Christ the centerpiece or fulcrum of the Christian faith?” It seems that in the cross “God sets the precedent for the necessity of blood and appropriateness of redemptive violence and suffering in setting things right.”2 That is to say, a Christian approval of and participation in redemptive violence and suffering simply follows divine precedent. Bell rejects the presumption that human sin offends against, and requires retribution from, God’s justice as enacted upon Christ, who steps in and takes it on the chin for us. Yet he also warns against shying away from the cross and Christ’s suffering, reminding us that both Satan and Peter specifically tempt Jesus to evade suffering. How then should we understand the suffering and violence of the cross?

Bell refuses to see the cross as a divine sanction of violence and suffering, instead arguing that it is “nothing less than the divine refusal of blood sacrifice, as well as any notion that suffering violence is or can be redemptive.” Rather than endorsing violence as a negative deterrent from sin, the cross reveals a God who is simply more interesting than sin, a “radiant beauty of the relentless love that seeks to redeem us [. . .] it is a love story from beginning to end.”3

However persuasive one takes Bells account to be, it fails to forge the crucial link between God’s refusal of blood sacrifice and everyday Christian practice. Where is the “act of faithful imagination” between God’s action in Jesus and “the rough-and-tumble of daily life”? Spending most of his time responding to potential criticisms, Bell neglects to address the everyday issues of what it might look like to bear one another’s sin without violence.

The following chapter, “God Does Not Hurry” by Kelly Johnson, builds on Bell’s work by arguing that hurry represents a pervasive, insidious form of violence, which Christians too often project onto a God who gets shit done. “Hurry” represents “enmity toward anything that gets in our way” and is rooted in “our sense of being endangered, imperiled by a lack of time.”4 God’s hurry to deliver the world just before it all goes to hell authorizes our hurry. Of course, heroic hurry requires tragic sacrifice.

Yet Johnson points out that the God of the Bible is neither hurried nor “heroic, because the story is not a tragedy in which the hero could suffer and strive against obstacles. When all is done, there is no need to plunge right into the next big thing: God is satisfied and rests.” Indeed, covenant faithfulness only has meaning across time as God’s people learn the shape of his love. The life, death, and resurrection of Jesus is the patience of God. Echoing Bell, Johnson argues that “God doesn’t use force on those he calls [. . . .] The fullness of power is not to react heroically [violently] against sinners, nor is it to efficiently make a better product than humanity, but to bear with them and carry on bringing about the salvation of all, undaunted.”5

Divine power is not simply the capacity to eliminate obstacles; rather, it takes all the time in the world to love beings previously perceived as “obstacles”—patience. Thus, Christians are free to take time to love and give thanks. The clock, after all, was invented to remind Christians when to stop working in order to pray. Johnson, more than any of the other authors, refreshingly links the human capacity to slow down and refuse the violence of hurry by reminding us of the centrality of worship to life. Worship incorporates Christians into God’s faithful acts of “imaginative discernment.” It participates in “time [as] the medium across which we receive God’s gifts, in word and Eucharist, and in which we are by grace able to offer gifts in return: our praise, our love, and, in union with our brother Jesus, our own lives.”6

In the final chapter, “God Does Father, Son and Holy Spirit,” Brent Laytham argues that God’s actions in the world mirror God’s own triune life. Therefore, “Christianity is not an explanation of how God can act in the world; it is a proclamation that God has acted to redeem the world. It is a gospel not a theory [. . .] the doctrine of the Trinity grows out of the realization, crudely put, that Jesus is God at work in human flesh, a work God continues through the Spirit working in the church.”7 The dual movements of Easter and Pentecost are the historical manifestation of God’s own eternally triune character; they are an iteration of God doing God—God living God’s own triune life. The very existence of the church hereby marks creation’s participation in God’s life, and any action of the church ought to mirror the divine pattern of mutual self-giving and thanksgiving.

The church, rather than a passive recipient of God’s saving action, is birthed by and participates in God’s life as the “ongoing sacrifice of the Son to the Father in the Spirit.”8 This sacrifice of praise invites all creation into a hospitable doxology in difference.

Sound theological reflection and nuanced incisive cultural criticism make this book an entertaining and worthwhile read. The essays succeed, in varying degrees, to help the church reflect on God’s actions that it might discern its own action. However, the lost art of doing theology as practical wisdom still remains at least partially lost, as the authors struggle to make explicit how their theological insights are, in fact, practical. The authors correctly outline the shape of this lost art as the imaginative discernment required to connect God’s triune doing to the life and worship of the church, yet the fact that these theologians struggle to execute their task illustrates how far removed theology has become from the ongoing life of the worshipping church. Nevertheless, the struggle to theologically discern the church’s engagement in the world is itself good news. Thanks be to God.

Nicolas Cage and the Problem of Evil: Why Do Good Movies Happen to Bad Actors?

Today, as I write this, the world is learning about the death of Ronnie James …